On January 15, LeChase helped celebrate the opening of the latest Merlin’s Magic Space. The new playroom, located in a non-profit facility in Middletown, NY, is the tenth such space in the United States. It was created through Merlin’s Magic Wand, a worldwide children’s charity operated by LEGOLAND® owner Merlin Entertainments. 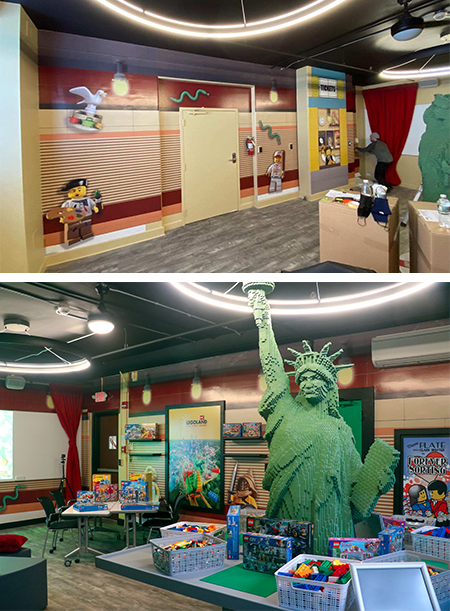 The Magic Space after construction (top photo) and furnished for the opening (bottom photo, courtesy of Merlin Entertainments).

LeChase, construction manager for the upcoming LEGOLAND New York Resort in Goshen, NY, helped build the space along with several of its subcontractors. The firms donated time, resources, materials and equipment for the effort. Despite several months of delays due to coronavirus, construction started in August and was completed in November.

With furnishings now installed, the Magic Space will serve children in a temporary housing facility run by HONOR – an organization that assists residents in Orange County, NY. The finished room includes space for children to play with LEGO® bricks, a built-in theater for watching movies, and a sensory space for children with autism.

Thanks to the LeChase Armonk team members who participated in the effort along with subcontractors MDS HVAC, Upstate Electric, Key Construction, Skyworks, L&M Fabrication and Advance Testing.

For news coverage of the opening in the Times Herald-Record, click here.