The Builders Exchange of Rochester honored Gary Roth with a Lifetime Achievement Award at a May 4 ceremony. Roth, whose career spans 55 years, was among several individuals recognized for their contributions to the local construction industry. 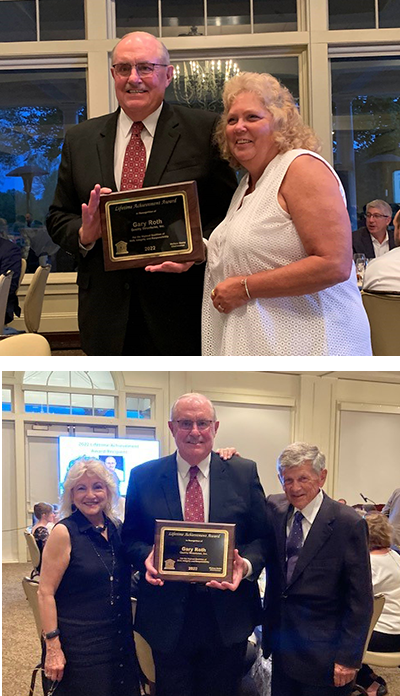 “It was a great evening,” Roth said afterwards. “I am truly honored to receive the award for all the years I have been in the construction industry, and it was great to have LeChase, Quality Structures, and friends at the event.”

Roth began his career as a union carpenter in 1966. Since then, he has touched nearly every corner of the local construction industry. He joined LeChase as a superintendent in 1988, advancing to the role of general superintendent in 1992. At the company, he participated in a variety of high-profile projects. These included the parking garage at Rochester International Airport, Kodak Park Building 38 and a number of hospital additions, office buildings and other structures.

He became vice president of field operations at LeChase in 1995. His expertise in heavy concrete contributed to a number of successful projects around the state, including the 25-story Turning Stone Casino hotel, entrance and auditorium complex. Given his broad experience directing skilled trades, he was then named president of Quality Structures, Inc.

In his broader industry contributions, Roth has chaired the Construction Industry Association of Rochester for over 25 years. He has also served on the board of UNICON since its inception. The organization encourages unions and management to work together for the overall good of the industry.