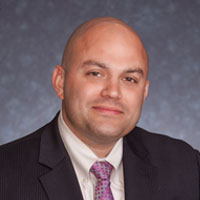 A vice president based in Rochester, Brian Russo has operational oversight on various initiatives, joint ventures, and projects. He leads several LeChase initiatives aimed at improving various processes and operations within the company. He began his construction career in 1997, serving as a project engineer, cost estimator and chief estimator at other firms before joining LeChase as director of preconstruction services in 2011. He became an operations manager in 2013, and was appointed to his current position in 2016. Brian has a B.S. in mechanical engineering from Pennsylvania State University. He is a member of the American Society of Professional Estimators and a former participant of Boston’s Future Leaders Program – a top professional platform for emerging business executives. He completed the Future Construction Leaders program offered by the Associated General Contractors of New York, and has LEED AP® (Leadership in Energy & Environmental Design) accreditation from the U.S. Green Building Council.